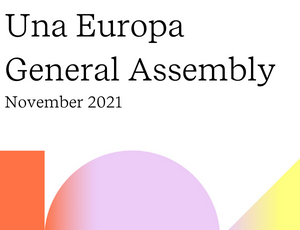 The Una Europa General Assembly took place on 2 and 3  November 2021 at Freie Universität Berlin. Over 50 academic and professional staff, students, and heads of the eight Una Europa partner universities from Berlin, Bologna, Edinburgh, Leuven, Madrid (Complutense), Krakow, Helsinki, and Paris (Panthéon-Sorbonne) came together in the first in-person meeting of the alliance in almost two years. At the General Assembly, the Jagiellonian University was represented by prof. dr hab. Stanisław Kistryn - Rector's Proxy for Cooperation within the Framework of Una Europa, prof. dr hab. Bartosz Brożek - Vice-Dean for international cooperation and research and Marco Reyes-Bernal - Una Europa Student Board Co-chair.

The week was kicked off with the second Una Talk on the topic of “European Universities – Driving the Sustainable University of the Future.” This expert roundtable discussion, which took place in the framework of Berlin Science Week, focused on the role European Universities in developing a sustainable landscape of higher education with views both from within and outside the Una Europa alliance. The talk is available online on the Una Europa YouTube channel.

This year’s General Assembly centred around formulating a joint vision for the future of the alliance, the Una Europa 2030 Strategy. Questions related to sustainability, diversity and inclusion, as well as multilingualism took centre stage, alongside with a discussion on the balance of new joint innovative programmes in teaching and increased cooperation in research and innovation. The Rectors of the Una Europa universities were joined by distinguished members of the Una Europa External Advisory Board to exchange on key considerations for the future, including collaboration with international higher education partners and outreach to non-academic partners within the eight respective eco-systems. Verena Blechinger-Talcott, Vice President for International Affairs at Freie Universität Berlin and Chair of the Una Board of Directors said: “We have achieved a lot in a relatively short time, and we want to continue to be just as ambitious in the future. We must always bear our goal of generating additional benefits for the participating universities in mind while developing the alliance. We have succeeded in doing just that thus far.”

Over the past two years, Una Europa has received funding under the prestigious European Universities pilot call, funded by the Erasmus+ programme. The first interim evaluation of this project has confirmed that the activities it has initiated – including joint Bachelor and PhD programmes, continuing education courses, and micro-qualifications – have created considerable added value within the sphere of higher education in Europe. Günter Ziegler, President of Freie Universität Berlin, echoed this positive evaluation: “Una Europa is truly a success story. Our alliance is incredibly strong in terms of its impact and research – also in comparison to other European networks. All partners are highly motivated in further intensifying our collaborative work. I believe that this network will help promote our position in Europe and that it will open up new possibilities for all members of our university.”

The Una Student Board also met in Berlin to discuss how the alliance should develop further in line with the hopes and ambitions of the student community. The series of Una Europa events culminated in the first Una Europa PhD Slam, which was livestreamed to a wide international audience. Eight doctoral students went head to head as they presented their dissertation research in the area of sustainability in an original way. René Reich, a PhD student at KU Leuven, won first place and received a prize of 1,000 euros. Second and third place went to Daniela Arisa Molinares (Complutense Madrid) and Carolina Buendia Sarmiento (University of Helsinki) respectively.